What Do We Mean By Solidarity Economy?

Solidarity economy (SE) is an organizing framework for those who wish to create a systemic commitment to and practice of interdependence and collective liberation in the economic activities that meet our material needs.  Solidarity economy rests on our shared values: cooperation, democracy, social and racial justice, environmental sustainability, and mutualism. Interdependence and respect are central.

Solidarity economies are transformative — they redistribute power and resources to those who have been most harmed by white supremacy, settler colonialism, patriarchy, ableism, and capitalism — and meet an immediate material need for a community. They are not symbolic, but actually delivering the housing, food, education, culture, and other needs humans require to thrive. They challenge the power of systems based on individualism, profit, and private property.

None of these models, tools, or activities on their own constitutes a ‘solidarity economy.’ That only develops when we work together as a movement, when SE organizers and communities build relationships and work in alignment with each other. 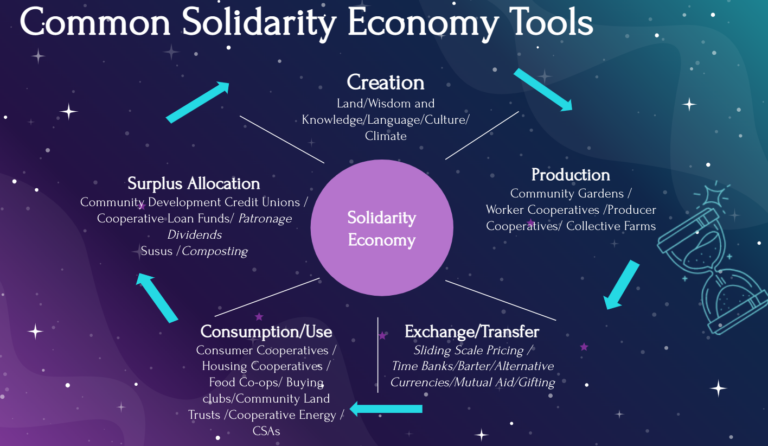 Truly embodying SE values means transforming our social, economic, and political relationships and institutions. Too often we see our organizations — from individual co-ops on up to international federations — replicate colonial and capitalist relationships and values. Perhaps the hardest part of our work is maintaining the balance between what’s realistic vs. what’s too idealistic and where we must compromise to keep our communities alive in the present even as we build towards a future liberation. Naming and honoring that tension, stretching ourselves to embody SE values, and acting collectively in decolonial and anti-capitalist formations, are central to the practices and principles offered here. These are the seeds of solidarity economies and greater freedom for all of us.

We believe that developing our capacity to self-govern and develop place-based SE movements is amongst the most urgent matters of our time. Capitalism, white supremacy and colonization are driving humans and many other species to extinction, and SE provides extraordinary opportunities to fundamentally change our relationships to ourselves, each other, and the land. We cannot afford to replicate business as usual at this time in history, and we don’t need to if we work together as a collective to change our relationships to one another’s organizations and focus on the task of building alignment and movement.

While many SE organizing activities are frequently described as solidarity economy or cooperative models for achieving “scale”, these “models” are often fetishized and divorced from their movement context and movement building goals. It is important to recognize that these models operate very differently depending on who is involved, who gets to define and control the initiative, whether decision-making is democratic and accountable, and whether they are embedded in and accountable to a broader SE network or movement.

SE innovation supports building a movement that is true to SE values and embraces the need for rigor and discipline to foster new possibilities. This is what we hope to do by wrestling with and building on existing organizing principles for cooperatives and for SE. We need to ensure that the interdependent economies that we’re visioning and creating are embodying SE values at any and every scale, as adrienne maree brown taught us in the following quote: 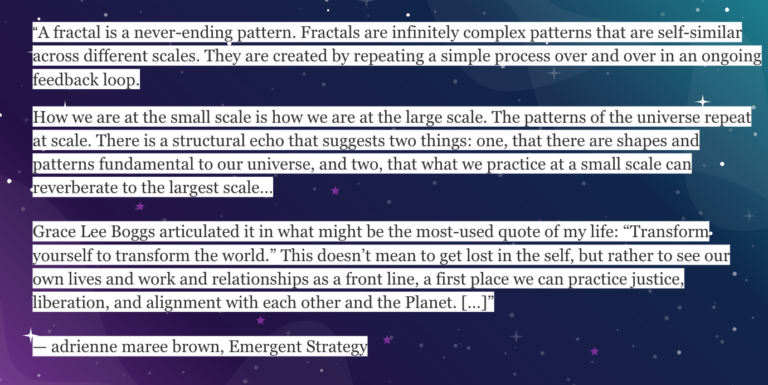 A NOTE ON SOCIAL VS. SOLIDARITY ECONOMY

As a term, Solidarity Economy came to the US primarily through the World Social Forum in Brazil, and throughout Latin America its practices are rooted in Indigenous ways of being and co-operative principles. There are many ways that solidarity economies, in practice but under other names, have existed for thousands of years in our communities. It is with humility that we step into both restoring or affirming those ways of being while also not romanticizing the past or fetishizing communities. Whatever traditions are present in our communities, linking them to solidarity economy principles and practices means participating in a global social movement intended to protect future life.

SE is distinct from the social economy, which according to Michelle Williams includes  nonprofits, co-ops, and social enterprises that, “seek to achieve limited, progressive change within the confines of the current social order by ameliorating the effects of market failure, unemployment and poverty.” Solidarity economy is a “transformative vision of society based on democratic self-management, redistribution, solidarity and reciprocity.” For more on this distinction see Michelle’s essay in the anthology  The Solidarity Economy and Social Transformation.

If you think your project could be part of solidarity economy movements, try applying the principles to that activity to explore why. If you feel you are in a social economy project but you’d like to see it move towards solidarity economy, check out the tools on the Commitments page.

In many places around the world, including within international organizations connected to this work (such as RIPESS or even the International Labour Organisation), you might hear the term Social and Solidarity Economy (SSE) and people may not make any distinction between them. In the context of the US and Canada, this distinction is incredibly important, because solidarity economy movements are vulnerable to elite capture through the nonprofit industrial complex and neoliberal social enterprise models. This is not meant to dilute or make any claims on the international definitions in use by bodies like RIPESS or the United Nations, but instead to support the precision needed to navigate solidarity economy movement building in our place-based context. We agree with Ethan Miller that our role is:

“…to recognize and honor the responsibility that we have to forge our own ideas about SE. SE is an open process, an invitation. The concept does not arise from a single political tradition or body of ideas. Its very nature and definition are in continual development, discussed and debated among its advocates. Seeking to “make the road by walking” rather than to push a closed or finalized ideology, SE is a “movement of movements” continually seeking connections and possibilities while holding on to the transformative commitment of shared values.”